Sometimes having a long drive feels quite refreshing on hot summer days. Almost everyone loves diving and going on a long road car trip. But have you ever encountered a situation where you are all set and enjoying the drive but slowly your car’s system starts getting hitches? It spoils the mood when your car’s cooling system stops working. Imagine yourself in your car with your favourite people, playing good music, talking and joking with each other, weaving happy memories… And among these bundles of sweet memories, you remember a bitter anecdote of sweating yourself in the middle of the road and feeling like a chicken waiting for someone to help you repair your car’s engine. Of course, you won’t like a simple problem like failing your car’s cooling system to ruin your trip album.

The car’s cooling system isn’t very complicated to understand,however, you should regularly consider a cooling system repair. It works on the simple principle of collecting heat through a liquid coolant from the inner passages of the engine thereby cooling the engine and emitting the collected heat through the fan. A car engine generates power through the expansion of high-pressure gases as well as high temperatures. During this power generation, a lot of heat is engendered due to this internal combustion and regular friction of mechanical parts. After a certain period of time, the generated heat exceeds the operating temperature and is removed with the help of a cooling agent. The car engine has an inbuilt cooling system that controls the reigns of keeping the engine working at optimal condition. This cooling system consists of a water pump, a radiator, radiator fan, coolant reservoir, thermostat, Coolant temperature Sensor (CTS), and a coolant which is generally a mixture of antifreeze with water.

The water pump is the first participant in the cooling process as it pumps the coolant. The thermostats control the flow of the coolant and help to maintain the proper operating temperature for the engine. The CTS does the work of monitoring the engine temperature. The data gathered by the coolant temperature sensor is also used to control the radiator and update the temperature gauge on the driver console. Then there is a radiator that is responsible for exchanging excess heat developed by the engine to the atmosphere.

Through combustion, the engine produces power by converting chemical energy into heat energy which is used to push the piston downwards to produce necessary power. The excess heat is absorbed by the engine thereby increasing its temperature. It is here when the cooling system comes into the picture. The coolant that is pumped by the water pump throughout all the passages within the engine blocks and heads absorbs the heat from the engine to bring the temperature of the engine in operating range. The coolant then travels from the cylinder head to the outlet for the radiator. However, the flow of the coolant is restricted by the thermostat until the coolant’s temperature reaches above 250 degrees celsius. The radiator fan is actuated by a thermostatic switch once the coolant flows outside the thermostat and enters the upper tank of the radiator.

The coolant next passes down the flat tubes in the radiator and loses its heat to the air flowing past the space between them. The radiator fan further helps in increasing the heat transfer rate by increasing the draught air. The temperature of the coolant considerably drops by the time it reaches the lower tank of the radiator. This coolant is then again circulated back around the engine cylinder and the cycle keeps repeating. But at the same time, while the coolant is releasing its heat in the atmosphere, the coolant in the engine will already start absorbing heat from the engine for the next cycle.

Over the years of use of the cooling system, the coolant creates mineral deposits throughout the passages and flat tubes in the system. These built-up deposits can obstruct the circulation of the coolant and block the passages which might result in inducing pressure on the cooling system. This may damage the tubes, fins around the tube in the radiator,  thermostat, or water pump.

Symptoms that your car needs a cooling system repair

As temperature plays an important role in the proper functioning of the car engine, your car will start hiccupping once the cooling system gets affected since it will fail to maintain the temperature of the engine. Below are some of the signs that your car may show to remind you of needing a cooling system repair sacramento. 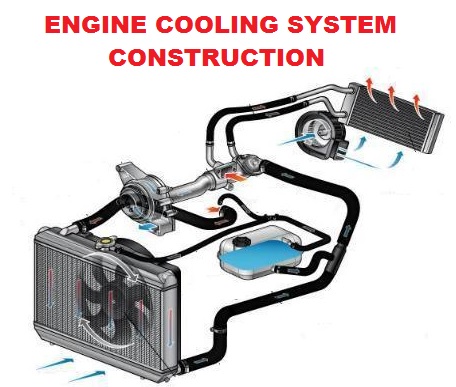 If your car starts exhaling excessive amounts of white exhaust smoke, it may mean that there is a leakage of coolant into the combustion chamber of the car.

If you notice steam coming out of your car hood, this may be a possible sign of your car suffering from overheating.

This is also one of the obvious signs of an affected cooling system. If you notice the temperature gauge of your dashboard rising into the red zone, then it means your cooling system isn’t working properly.

When the liquid inside the engine blocks and heads start boiling, it results in removing the paint and forms rust. This process emanates the discoloured fluid droplets over the engine when the antifreeze is sprayed onto the hot engine parts. This engine discoloration might be one of the reasons for the improper functioning of your car’s cooling system.

If you ever smell and find a sweet bright green liquid from under your car, it might be the by-product of the leaking coolant.

Any of the above conditions when observed signals for a cooling system repair.

What are the Essential Steps in Blotting Techniques?