Nintendo DS Emulators: There is no kid from the ’90s to the early 2000s who doesn’t miss Nintendo’s famous games such as Super Mario, The Legend of Zelda, 90 Tank, etc. If you’re given a chance to go to the future or past in a time machine you will choose to go to childhood. The primary reason for that will be these Retro games. Even the kids of this age are eager to play those games.

Remember there are a lot of great choices on any platform, be it PC, iOS, or Android. Read on to find how you can go to those golden times. The titles in this list of  Best Nintendo Ds Emulator are actively regulated and maintained by the developers to provide a bug-free experience.


This is the most sought for Emulator in the list even though it is a paid application. At a reasonable price, the experience it provides is top-notch. It is a blend of retro with the latest technology in every sense. Along with the capability to support all the retro games out there, it gives heavy customization, high definition, and dimensions. The performance can only be limited by your gadget specifications. It has added features such as resuming your ongoing game on another device or time by saving it to the drive. You can even add physical controllers or add-on controllers. Gaming includes Cheat code support and game fast forward. The only drawbacks include lack of wifi gaming and multiplayer.

NDS4Droid is a free emulator which is also open-source. These two reasons alone keep it on top of the free Nintendo emulator list. It supports game sound as well as game saving. You can return and start from where you left off along with the true retro gaming feel the game sounds provide. The app has been here for a long time and is managed for users by users. 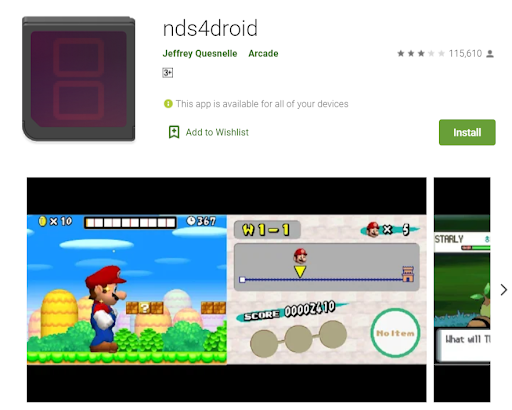 With that said, it has been a while since it got updated and has a lot of bugs. The user base does add a lot of handy features to the game from time to time. The saving feature goes dead at times too. This emulator staggers the most when the game requires a lot of button presses. Not having famous games such as Pokemon is another major drawback.

This is the third on the list as it is the most downloaded free Nintendo Emulator with a lot of positive reviews and features. You should have a ROM to use it. You can load game files in   .nds, .zip, .7z, and .rar. 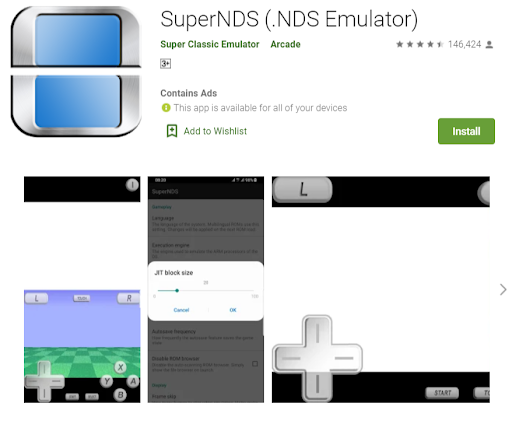 The emulator is relatively easy to use. All you have to do is to copy the game to an SD card or internal chipset storage. Then load the game on the SuperNDS emulator. That’s it. You are all set to play. It does have crashing issues and the active developer base takes care of most of the issues soonest possible. An uncompressed ROM can make this app perform better.


Due to the features that go beyond retro gaming, this app is far special than any other on the list. This open-source emulator provides feature-rich gaming and will be the favorite for an experienced user. It means when coupled with another app Libretro you can even build your games, emulators, and other programs. 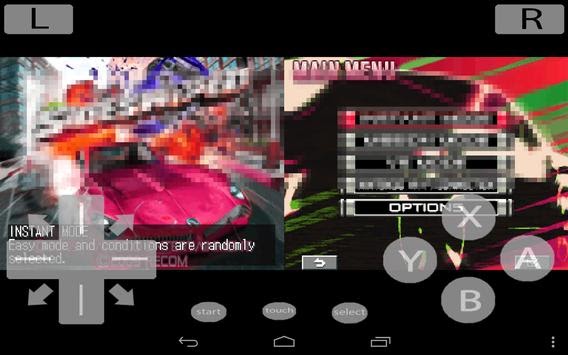 Most of the problems you face can be solved by certain tweaks in the settings. It is used to run games like DS, DSi, 3DS, 64, NES, SNES, Atari, MAME, and a lot more. This emulator even allows you to go live on twitch or record your gaming. The front-end GUI is only provided for emulators, game engines, and media players. You have to install a modular program called ‘cores’ for other requirements.

This one has one of the best GUI and can run all the ROMs on your device. The best part about this emulator is that it supports SNES, Playstation, GBC, NES, GBA along with the Nintendo console. Has fast forward feature, and In-game screenshots. It has up to 20 slots to save ROM. The drawback is the advertisements you have to deal with.


This game has lesser customization features and does the basic features of loading ROMs. It also offers decent gaming and graphics. Save feature, cheat code, customizable buttons, etc are available too along with support for external controls.


This one has a very simple UI that also gets on with PC, Linux, and iOS. It also comes with some unique features playing your favorite track, etc.

Even if it’s the end of the list, this is a far superior emulator. It is not readily available on Playstore. You have to download the .apk file. It has all the required features in it.

This app requires 2 GB or more and a 6.0+ Android version on recognized devices.  It feature-packed emulator. This app also isn’t available in Playstore and you have to download a .apk file. It is extremely feature-rich but didn’t make it to the top of the list due to lack of official availability.